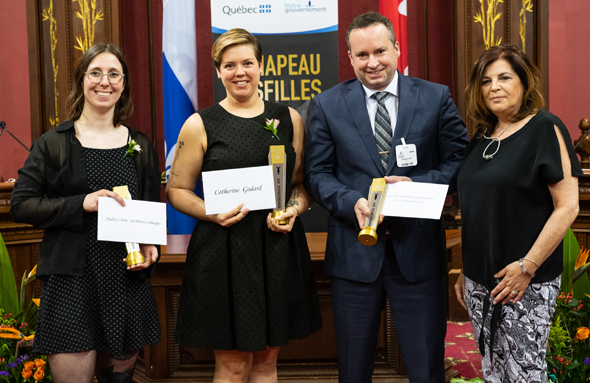 At the closing gala for the 23rd Hats Off to You! competition, which took place June 10 at the Assemblée nationale, the Commission de la construction du Québec (CCQ) handed out three Mixité en chantier awards, accompanied by cash prizes, in the “Future Construction Worker,” “Future Construction Contractor,” and “Mentorship” sections.

This year, the CCQ wanted to emphasize the significance of the efforts made by the recipients, who, in their way, are contributing to making a bigger place for women in construction. The prizes awarded to the future worker and future contactor have been increased from $2,000 to $2,500. The prize awarded in the “Mentorship” section rose from $2,000 to $3,000.

This year, the recipients are:

This centre stands out for its noteworthy contribution to the success of its female students. These young women are systematically monitored from the day they are admitted, and they are offered job-integration strategies. Finally, all students at the centre attend a session on sensitization to sexual harassment on the job.

The CCQ congratulates the recipients, as well as all of the students and teaching institutions that were nominated.